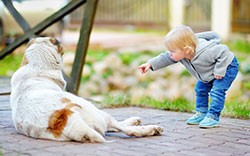 Gestures are body movements that have meanings and communicate to others.  They have been observed in children before learning to speak (Iverson & Goldin-Meadow, 1997). Gestures are as important as facial expressions when interacting with other people (Ferrell 2011).  Pointing, a common gesture, is an important part of development in language, fine motor skills, self-help skills, and hand usage (Ferrell 2011). Teaching a child to point will help with her ability to orientate in space. Children typically develop a larger repertoire of gestures (such as reaching, pointing, and imitating other people’s gestures) if they have some vision and can observe gestures (Chen, 2014). However, children with visual impairments, especially infants and toddlers who are blind, need encouragement to learn to point. To use pointing to express desires and requests a child must have repeated experiences with activities that promote pointing (Chen, 2014).

In a study of gestures in sighted and blind children by Iverson and Goldin-Meadow (1997) found that children who were blind produced gestures which were similar to those that their sighted peers used. Their results interestingly suggest that gesture may serve a greater purpose for the speaker than the listener. The gestures seemed to help the child think through her thoughts. They also seemed to come more naturally than learned. “Gesture may help the child think through the problem by providing a medium for expressing relatively inarticulable thoughts.” (Iverson & Goldwin-Meadow, 1997). “In terms of content, the blind children conveyed the same types of conservation rationales in gesture as did the sighted children. They even highlighted the same dimensions of comparison in their gestures as the sighted children, suggesting that tactile exploration of an object can give rise to similar kinds of knowledge of objects as visual exploration.” (Iverson & Goldwin-Meadow, 1997). This suggests that visual experience is not always essential for the development of most gestures. However, the greatest difference in gestures between the blind and sighted children was the gesture of pointing. It was almost totally absent in children who were blind. Children who were blind did not use their index finger to point. They did use a different type of gesture to indicate a line of direction, such as an open hand (Iverson & Goldwin-Meadow, 1997). Therefore, in order for pointing to develop, pointing needs to be explicitly encouraged and taught to children who are blind.

Children who are visually impaired can be taught to point by feeling the gesture. As early intervention visual impairment (EIVI) professionals, we can also work with orientation and mobility specialists to encourage this. Children develop gestures through active participation in everyday activities. “Conventional gestures should be encouraged as appropriate, that is, nodding to indicate agreement, shaking the head in disagreement or refusal, or pointing or tapping an object to direct attention or make a request.” (Chen, 2014).  There are many activities that teach the gesture of pointing. For example, parents can teach pointing by using their child’s body to play games. They can ask, “Where’s your mouth?” and then help the child to point to her mouth with her finger. This can become a game as parents continue identifying and pointing to body parts on each other. Parents can also use a sound activity that will promote pointing and an awareness of other people and things in the surrounding environment.  For example, the parent can take the child’s hand to point to a favorite sound toy using a hand-over-hand or hand-under-hand approach. Parents can activate a toy and wait for the child’s response, then take the child’s hand to point and touch the toy. Parents can be encouraged to provide less assistance such as just touching the child’s hand, then gently supporting or guiding the child’s elbow as the child continues to explore and learn. Let the child know the toy is within arm’s reach as this will help increase her awareness that objects exist in her environment and reinforce pointing (Ferrell, 2011). Use this approach with familiar people like Mom, Dad, siblings, and pets. This will provide fun practice with pointing within the daily play routine.