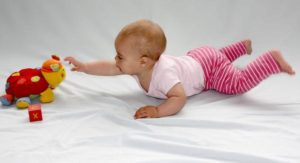 Of the myriad developmental milestones that children achieve from birth to the age of three, reaching to a sound stands out as one of the most important–if not the most important–for babies who are blind or severely visually impaired. Several researchers, including Fazzi, et al. (2002), refer to Fraiberg’s assertion that reaching to a sound cue is a “key moment” in the development of blind and visually impaired babies, and serves as “a catalyst for all subsequent development.” As characterized by Ferrell (2011), reaching is “a means to an end–to thinking, to choosing, to interacting with the environment.” Active, meaningful reaching can mean the difference between a child being an active learner or becoming a passive participant in the wider world.

The specific achievement of reaching to sound follows its own progression, as enumerated by Fazzi et al.(2002):

all leading toward the most important aspect of this skill–using sound cues for orientation. Although the ability to use sound cues for orientation carries obvious connotations for older children, upon deeper reflection, the achievement of this milestone indicates that the baby has also reached another crucial cognitive milestone–that of object permanence. Until a baby realizes that objects exist “out there” even when s/he is not in physical contact with them, there is no motivation to initiate movement. Unlike a typically developing infant, babies who are blind or visually impaired only begin to walk after they grasp the concept of object permanence (Bigelow, 1992). The fact that developing object permanence using sound is a more difficult skill than developing it using sight contributes to the delays seen in gross motor skills, particularly walking, among babies who are blind or visually impaired (Troster & Brambring, 1993). As Schneekloth (1989) noted, delays in gross motor skills among this population are the result of a lack of experience with the wider world, not a lack of ability to reach motor milestones. Encouraging reaching to sound will eventually translate to motivation for the baby to move about and explore the environment. Such exploration leads to concept development, compilation of information about one’s environment, naming of objects found in the environment, development of spatial concepts, and development of problem-solving strategies.

According to Maida, et al. (1996), research supports the idea that encouraging babies’ exploration skills reduces overall developmental delays. Early intervention helps families learn to provide extrinsic motivation for their babies to reach and move. Ihsen, Troster, & Brambring (2010) point out that sound is not as strong a motivator as touch is to babies who are blind or visually impaired. Therefore, it is necessary for interventionists (and, by extension, families) to present the child with both noisy and silent toys–some touching the child’s body, and some that are scattered in places where the baby will accidentally touch and discover them. Presenting toys in this manner helps the child learn how to locate objects and that, by reaching, s/he can obtain a desired item independently.

EI personnel can help families support their babies in the very early months of life by encouraging bonding experiences and connections that build trust between baby and caregiver, including:

By providing early interventions, EI professionals can facilitate the reach-to-sound milestone. Reaching this milestone dramatically opens the door for the child to initiate independent movement, and from there, the possibilities for growth are truly endless.

Ihsen, E., Tröster, H., & Brambring, M. (2010).  The role of sound in encouraging infants with congenital blindness to reach for objects.  Journal of Visual Impairment and Blindness, 104(8).