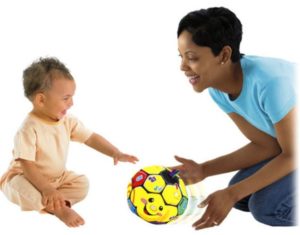 The ability to converse and interact with others begins with the foundational skill of turn-taking (Ferrell, 2011) but how does this essential skill develop in our children with visual impairments? Various forms of turn-taking can be expected in typically developing infants as early as birth to one year old based on The Oregon Project for Visually Impaired & Blind Preschool Children:  Skill Inventory. Across multiple domains, including cognitive, language, socialization, vision, compensatory, and self-help, infants from birth to one year old can engage in this give and take that helps them learn to anticipate responses and cognitively process how things work. (Ferrell, 2011) For example, typically developing infants start imitating, initiating, and responding to adults using movement or vocalizations to indicate wants and needs before the age of one. They start participating in desired activities, such as peek-a-boo, that require turn-taking and allow them to elicit positive responses from adults (Anderson, Boigon, Davis, & DeWaard, 2007).

For our infants with visual impairments, they are lacking the visual stimuli that help prompt and maintain interactions with adults, especially their caregivers. According to Troster and Brambring (1992), blind infants cannot identify when or if they have attracted the attention of their mothers. Conversely, mothers of blind infants have found it difficult to recognize and respond to the needs of their children due to the lack of visual engagement. The mothers may feel their infants with visual impairments appear withdrawn from attempts at interaction. Because of these contributing factors, infants with visual impairments may not receive regular and immediate responses to their behaviors as do sighted infants. The infants then cannot make the connection between their actions and the mothers’ responses. Instead, the infants view the mothers’ care as sporadic and irrelevant. This prohibits the ability of infants to anticipate and request attention and comprehend the relationship between action and reaction.

For early intervention professionals, it is crucial to help parents establish turn-taking with their infants. Interventionists can encourage parents to provide ample auditory and tactile feedback. (Ferrell, 2011, p. 152) Campbell (2007) stressed the importance of parent vocalizations. In fact, interventionists can support parents in establishing familiar experiences and patterns of interaction using verbal responses and analyze typical daily routines and incorporate these responses into those routines. Troster and Brambring (1992) found that infants more consistently responded to tactile stimulation than auditory. However, they discovered that the attention span of infants who were blind was shorter. Interventionists can help parents recognize the wait-time needed to allow their infants time to respond, as well as the use of potentially stronger tactile (or auditory) prompts to maintain their infants’ attention. Troster and Brambring suggest the avoidance of the use of objects before the age of 1 during turn-taking activities as infants with visual impairments have difficulty making connections to games with objects. For example, interventionists can make activity suggestions that avoid external materials like puppets or dolls. For infants with visual impairments under the age of one, Troster and Brambring (1992) recommend simply using the parents and children themselves. They can play peek-a-boo with the parents’ hands or sing songs, such as This Little Piggy, using the infants’ own body parts. Most importantly, Priesler (1995) advocates for the emotional bond formed between parent and infant. It is important to foster opportunities for parents to verbally and tactually interact with their infants, including games, singing, and cuddling.