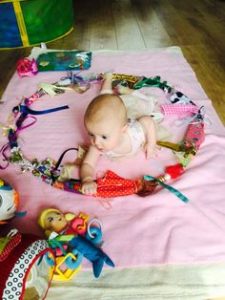 It is well-known that “tummy time” is important for an infant’s motor development. The term a physical therapist might use for “tummy time” is prone position. The benefits of practicing prone position include opportunities for weight bearing—which leads to: awareness of arms and hands, improved muscle tone, head support/ balance, rotation, reaching, grasping, and eventually ability to sit and crawl. Sighted infants may be motivated to be in this position because they are lifting their heads up in order to see people or objects around them. The same may not always be true for an infant with a visual impairment, especially an infant that is blind.

Because prone position requires an infant to bear weight on their arms and hands, they become more aware of them. This awareness is especially important for infants with visual impairments because they rely on their hands for gathering information. Muscle tone and head support/ balance are also improved with “tummy time” due to the fact that they are using the muscles in their upper body (arms, back, neck, shoulders, etc.). Rotation, reaching, and grasping can begin to develop while the infant is in prone position as well. This weight bearing and development of upper body strength is foundational for sitting and crawling.

Pogrund & Fazzi (2002), explain that prone position is typically seen in sighted children between the ages of two and three months. According to Ferrell (2011), it is very common for babies with visual impairments to have low muscle tone in their torso, which may be due to lack of experience with “tummy time”, as well as simply turning in different directions while sitting. If this is true for a child that you are working with, and you are not sure about the cause or next steps, it is important to work alongside the physical therapist (PT). The PT will be able to provide accurate information in terms of the physical well-being of the child, and you can add suggestions for compensating for vision loss. Ferrell (2011), also states that infants with visual impairments may not like lying on their tummy because they are not motivated to lift themselves to look around.

Similarly, Pogrund & Fazzi (2002) also mention that “tummy time” helps a child to see what is nearby and turn their head in all directions; however, babies with visual impairments often develop an understanding of objects later, and are not aware or interested in observing the actions of objects. It is important to mention that Pogrund & Fazzi (2002), stated that the American Academy of Pediatrics’ (AAP) (1997) recommend that infants do not sleep in this position, as there is a higher risk for Sudden Infant Death Syndrome (SIDS). As EIVI professionals, we need to come up with ways to help the families engage their child during “tummy time”, especially children that do not have any vision.

We can help families instill the motivation that infants with visual impairments need to practice “tummy time”. Lueck, Chen, Kekelis, and Hartmann, (2008) have several suggestions for “tummy time”, including: having the child lay on the caregiver’s stomach, stroking his back and neck to cause a reflex, pressing on his bottom to keep it down as he lifts up, and use sound-making toys. Ferrell (2011), suggests: buying a play mat or rolling a towel to position under the shoulders to support the chest, massaging baby to make him aware of body part (such as arms and hands), using a mirror, musical instrument, penlight or flashlight in front of the baby, and getting down on the floor with him. Like the tummy-to-tummy position mentioned above, there are a few others that may also result in similar benefits as “tummy time”.

The football position can incorporate movement and social interaction, which may work as motivators. For this position, hold the baby with one arm under his chest and one arm between his legs with your hand on his belly. While in this position you can have a sibling or other familiar person sing and provide tactual feedback as you rock the baby towards them. Another position to try is placing the child on his belly and onto your lap with the leg under his chest slightly raised. These positions also provide more support, and may work well for babies with significantly low muscle tone. It is a good idea to start working in a few minutes of “tummy time” at first and gradually increase the amount of time to a total of about an hour spread throughout the day. Our role as an EIVI professional is to include the family in exploring strategies while modeling as necessary during the intervention. Then, encourage caregivers to keep trying strategies that work for their family consistently throughout different daily routines.