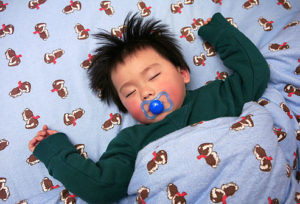 Sleep Disruption in Infants and Toddlers with Visual Impairments

Sleep is controlled by an individual’s circadian rhythm. Circadian rhythm is controlled by social events in an individual’s life such as meals, activities, or noise levels (Stores, 1999). As part of this rhythm, sleep in mainly initiated by the perception of light as it passes through the retina. If large amounts of light are present, the brain perceives it to be day; while the absence of light is perceived as night.  When the brain perceives there to be limited light the pineal gland triggers a release of melatonin to encourage sleep (Stores, 1999). To correct this rhythmical disruption Carr et al. (2007) stressed that behavioral intervention should be the first approach. The study also noted that this could be paired with melatonin supplementation therapy, albeit short term due to potential dependency and side effects within an adult test group.

As a child sleeps their brain experiences five to seven brief periods of wakefulness (Dahl, 1996). After self-adjustments are made the child will soothe back to sleep. If the child is suffering from sleep disruption the period of wakefulness would increase in time and consciousness level due to the inability to reestablish sleep. As the child develops this new and unhealthy sleep pattern the adults in their lives do as well (Meijer, 2007). The old adage that ‘if mama isn’t happy no one is happy’ is true with babies sleeping as well. As the pattern continues the sleep debt grows, along with the compounding effects of impaired or nominal sleep (Mindell, 2010). According to Mindell, for every one hour of sleep debt established two hours of sleep is owed to regain a zero level.

Individuals with visual impairment suffer most commonly from Circadian Rhythm Disorder, also known as Non 24. Essentially the body is unable to establish a 24-hour pattern or routine due to the lack of visual input as discussed before. This leads to lack of production of melatonin or the slowed release of melatonin. The 24-hour cycle is reset when the retina perceives an increasing amount of light simulating morning. Within the population of individuals with visually impairment this is regulated through a combination of behavior cues, melatonin, and other medications

Routine is the keystone of behavioral cues for children with visually impairments suffering from a sleep disruption. Monsen (2014) laid out an easy to follow table of cues or routine points throughout the day of a young child. A routine she references throughout the article is the bedtime routine column. The bedtime routine begins at the time of dinner, with medicine and a bath to follow. These cues tell the child, that it is time to slow down for bed. It is also noted the parents quietly and repeatedly note that it is nighttime and that at night we close our eyes and go to sleep. The combination of these cues will encourage the child to slow and prepare for the next step, sleep. By teaching the child the routine needed to encourage sleep it will also afford them the skills to self soothe to sleep during the 5-7 wakeful periods at night. As a vision service, part of the DTVs role is to help families understand the importance of routine while helping families build routine into their lives.

Many people do not think about sleep in their everyday lives. Those who do are plagued by lack of sleep or disruptions that leave them feeling less than well rested. When an individual suffers from lack of sleep or disrupted sleep it negatively affects all areas of their life. As providers, we will not fix the limited vision that children have. However we can provide the family with a plan and resources to help their child and family sleep restfully.