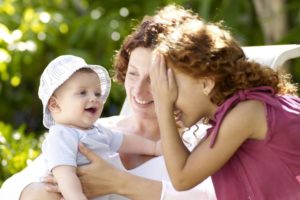 There are many important skills that develop during a child’s early years, especially throughout the first year. When a child has a visual impairment, a notable difference in their development compared to a sighted child is the way in which they learn. In her book Reach Out and Teach (2011), Ferrell highlights how important the intentional development of communication skills is for a child with a visual impairment.

While sighted babies draw in a lot of information through their vision during events throughout the day, babies with visual impairments need to use other senses in order to experience those same events. Babies should have many opportunities to touch what cannot be seen (Ferrell, 2011). As the baby explores, not only should toys and objects be named, but they should also be described. Joint attention should be encouraged by pointing out familiar objects beyond the reach of the baby. If the baby communicates through coo-ing or sounds, expand on that communication by further describing the object. By accompanying activities with both a tactile experience and words that describe them, not only does it expand the child’s vocabulary but also develops concepts by reinforcing connections. It is a very powerful technique for supporting a child’s language development and reinforcing the child’s behaviors (Chen, 2014).

Depending on the child’s vision loss, hand-under-hand guidance can be used to support communication by placing the child’s hand on top of the caregiver’s hand. Tactilely explore the object together and comment on the child’s action. Expand on the vocalizations of the child by describing the object and acknowledging what they are touching (Lueck, 2008).

There are many factors to consider when verbalizing objects, activities, or sounds within the baby’s environment. One consideration is that there are often multiple meanings for the same word. Take the word bell for example. There could be a telephone bell, doorbell, church bell, alarm clock bell, school bell, bicycle bell, etc. It is important to be specific as to what type of bell you are referring to so the baby does not become confused. If you refer to a bell when the doorbell rings at home, the baby might be confused if you later refer to a bell at the park when you hear the bell on a bicycle (Ferrell, 2011). Another factor to consider is using sounds within the baby’s environment. It is important to be aware of all of the sounds taking place when you are describing a sound to the baby. While you may be describing a sound nearby, the baby could be hearing a sound in the distance that you are not paying attention to. Eventually the baby will learn to pick out important sounds and ignore other sounds, but until then, it is important to help the baby distinguish one sound from another.

Communication and language development is very important within the first year of a child’s development. Making an effort to verbalize activities, sounds, and objects within the child’s daily routine and environment as well as giving the child the opportunity to explore objects tactilely can help the child with a visual impairment develop those vital skills.

Ferrell, K. A. (2011). Reach out and teach: Helping your child who is visually impaired learn and grow. New York, NY: AFB Press.